In his very excellent book Elements of Poker, still one of my all-time favorites, Tommy Angelo categorizes his experience with many different kinds of tilt:

Before I add chat-box tilt to this impressive list, let me regale you with some all-important context, i.e., a brief bad beat story.

For starters, a picture tells a thousand words, which spares me some typing and you some reading. 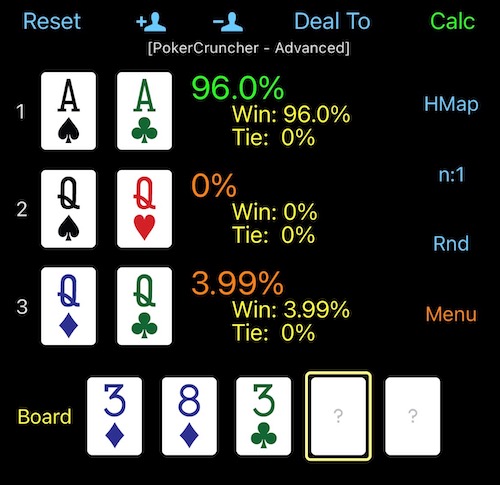 For purposes of this blog, I’ll call the player with AA “Eric.”

The board ran out with two more diamonds, giving Q♦ Q♣ a flush, the only possible way Eric could lose.

I told him, in my best, sarcastic as I would only speak to longtime friends, do-as-I-say-not-as-I-do tone, that he “…should congratulate yourself on a hand well-played when the cards are revealed, and not pay any attention to what happens after. Until the shove/call, it’s poker (the skill & decision making part). After… it’s randomness and variance in a shuffled deck.”

In theory, if Eric were a Vulcan, that’s what he would do. Being human and being me, I’m pretty sure I would follow a sleepless night with a walk out on my metaphorical ledge to gaze wistfully down. It looks so peaceful, doesn’t it?

Eric explained what really put him on tilt — the chat-box dialogue that followed.

Villain: “You’ve been getting lucky all day and now you cry.”

Eric: “Fuck you buddy. I said it hurt. Be a classy winner.”

After the game has moved on. The 10th inning. 19th hole. Penalty box.

If poker were football, a very authoritative voice would declare: “After the play, unsportsmanlike conduct. Fifteen big blinds penalty and automatic loss of button!”