I’m still not very good at Pot Limit Omaha, but might be getting slowly better. Here’s an interesting PLO spot, played via a mobile app private club, with blinds of $1/2 and a $0.25 ante. 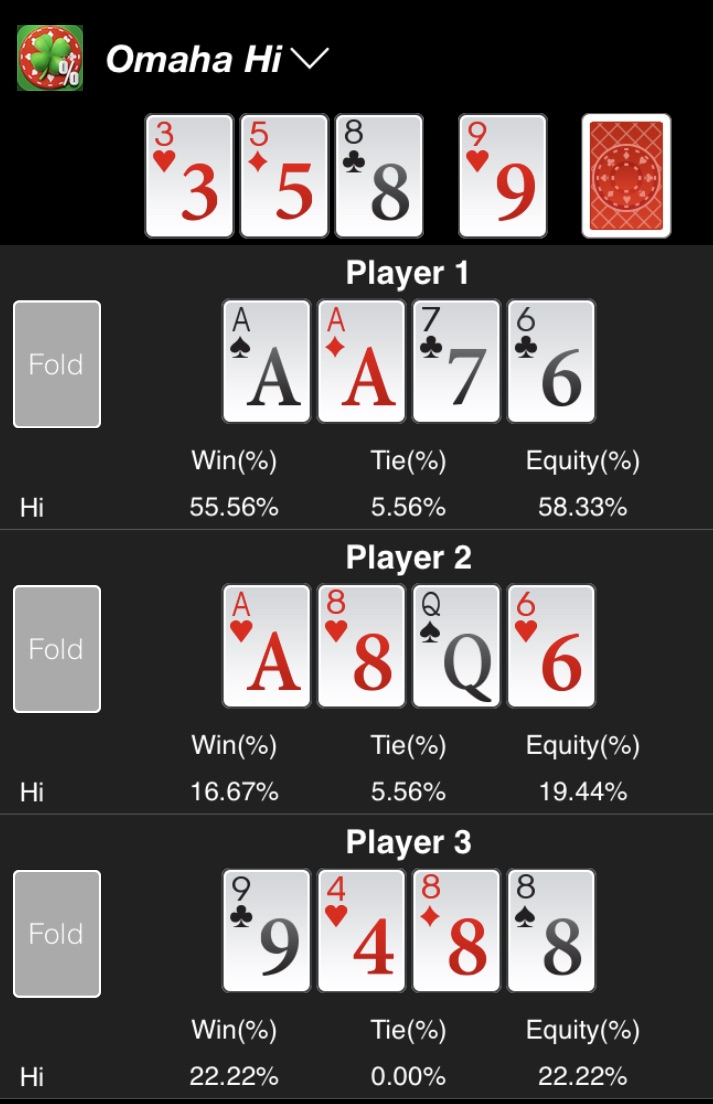 Even with the nuts (as Player 1), I had to dodge Player 2’s nut flush draw and Player 3’s full house draw, leaving me with 58% equity. Fortunately the river was a brick and my session was off to a great start. After flopping top set of QQQ‘s twice in a very short span, I built my stack to nearly $1,200 and was still there when hand #27 came along.

Playing six-handed and under-the-gun with K♠K♦6♠5♥, I made a pot-sized raise to $8.50. The next player called, followed by a pot-sized 3-bet to $38.50. For purposes of this post, I’ll call the re-raiser “Rudy.” I had to assume a very large part of his range included AA, because…

The next player called. For purposes of this post, I’ll call him “Mike.” He started the hand with $214.

The big blind also called. I actually considered folding (told you my image was tight!), but decided to call. Even though I had KK, I considered this to be a set-mining spot. With $135 in the pot and $30 more for me to call, the pot was laying 4.5-to-1 odds. With three opponents and Rudy’s stack size, the additional implied odds justified the call.

The flop was A♠9♠8♥. Fuggedabout set mining. I flopped a nut flush draw.

Let’s suppose Rudy really did have AA. He would have top set and favorable position on me. If I played my flush draw aggressively, I would simply be gambling. At least one of my flush outs would be counterfeited, and making a set of KKK‘s on the turn or river would be disastrous. My only backup equity is three non-spade 7‘s that would give me the idiot end of a straight. Which might not be good.

After the small blind and I both checked, Rudy bet $86 into a pot of $165. I was a bit surprised he didn’t bet more, but stuck to my read that he most likely flopped a set of aces. Mike called (hmmm… also a flush draw? smaller set? straight or wrap draw?) and the small blind folded. With $337 in the pot and $86 to call, I was getting 3.9-to-1 odds, meaning I needed just over 20% equity to justify calling (without any implied odds). If the flush came, I should lead out with an aggressive bet to force Rudy to make a difficult decision with his (likely) set of aces and a card still to come.

The probability of making the nut flush (excluding the 8♠ which would pair the board) on the next card was 17.8%, plus my gutshot straight draw might be good, plus there were other turn cards (like a T) that might slow Rudy down and get me a cheap look at the river card.

Dammit! My session was going really well, and now I’m potentially losing $350 chasing a draw – from out-of-position – where I feel very confident I’ve been behind the entire way. This is a common source of spew in PLO.

What if one or both of these villains has blockers? It’s not possible to be as precise about ranges and combinatorics in PLO as you can be in Hold’em. Quite often you have far fewer outs than you thought. (Quick sidebar: this happened to me the previous night, where I had top set on a 532 flop against a villain holding A433.) The fact that Mike is still in the hand helps me get better pot odds, but hands with flush and/or straight (or wrap) draws comprise a large chunk of his range after he puts his entire stack at risk.

Mike may have a combo draw that includes Q♠T♠, Q♠J♠, J♠T♠ or T♠7♠. Or a wrap with a 7 included. Maybe Rudy’s comfort in betting not much more than half-pot is due to him having flush blockers, with a hand like AAxx where both xx cards are spades.

Maybe, maybe, maybe… Maybe I’m just a chicken. Maybe one of the reasons I’ve survived so many years of playing poker is my willingness to wait for better spots. Maybe I’ve seen this movie already and know how it ends. Since Mike was all-in, however, I get to see both of their hole cards as well as the river –> Q♠ of course.

If I had a time machine…

Here is the actual status on the turn:

My actual equity was 25%, slightly above the 23.2% needed to make calling profitable. My read was correct about Rudy (Player 2) having a set of aces. My straight draw was live, but Rudy blocked one  flush out and Mike (Player 3) blocked one the sevens that I would have needed to make a straight.

The real takeaway here is this: IT DOESN’T MATTER.

When the math is this close on a “should I call or should I fold?” decision, it simply doesn’t move the needle on your long-term win rate. Sure, I would like to have won this pot. Just as much as I would like to avoid dumping too many chips into chasing draws.

After some additional good fortune, I finished with a nice win in the books. And shouldn’t complain. (Keyword: shouldn’t.)