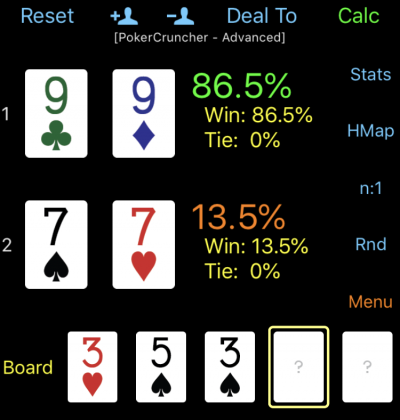 He makes a backdoor flush. Ouch.

Undeterred, I buy-in another full stack of chips. I also make note of his aggression. He had raised on the button, called my 3-bet from the small blind, then raised all-in over the top of my flop continuation bet. Otherwise, I’m readless as to this particular villain.

Exactly two hands later, I have KK, and make a pot-sized raise after the same villain limps in from UTG+1.

It folds back to him, and he re-raises to nearly 5x the size of my raise. This is always interesting with K♠K♣, facing a limp / back-raise. Maybe I’m slightly (?) tilted, but I’m unconvinced that he has AA here. If he does and I jam, I’m toast. At breakfast, jam goes well with toast, especially whole wheat toast or a toasted english muffin. Sometimes Mrs. makes homemade english muffins and they’re amazing with jam. But I digress. If he doesn’t have AA and I jam, I’m probably going to lose my customer.

I call. The flop is 9♠8♠6♠, giving me a 2nd nut flush draw to go with pocket kings. He down sizes his continuation bet, to approx. 1/3 of the pot. What might I be worried about?

If he has the other two kings, the red ones, I’m free rolling. And I destroy anything else.

I elect to jam. I think that looks more like I might have a naked ace of spades and more likely to get a call by QQ or JJ. If he does have AA with the ace of spades, it’s just not my day… but I refuse to live in constant fear.

He snap calls, and turns over A♠T♠, a hand I don’t even put in his pre-flop range but gives him the mortal nuts. The turn 7♠ improves his hand to a straight flush. The immortal nuts, as if the mere mortal nuts wasn’t good enough.

I wish Tom Petty were still alive, as surely he would write a new song, although this might be more suited for some country twang.

Please give me a ra-a-ange…

I ain’t in the mood toda-a-ayyy!

My friends who run good… how to you avoid this?