What follows is a guest blog post, from a good friend who, for purposes of this blog, wishes to be referred to as “King Karl.” King Karl says he enjoyed my recent post: “Verbal is Binding” means VERBAL IS BINDING!, which described a strict enforcement of this rule despite a player’s obvious intentions being different from his verbal declaration, and no action having been affected before a ruling was sought.

Some rules in life seldom apply —  I before E, except after C, really?  The sCIEnce of rules is wEIrd like that.  Never trust a fart.  Umm, that’s the only compatibility test I trust in life.  And in the poker world, Verbal… Is… Binding…

Please allow me to recap my snub at the Golden Nugget casino in downtown Las Vegas, so you can see why verbal is cheap.

I won’t bore you with my flawless pre-flop, post flop & turn action.  I’ll just cut right to the river which is down to me and the “Verbal Villain.”  The game is $1/2 no limit Texas Holdem. On a very swollen pot, I’m first to act after just filling up a boat.  Yahtzee!  I slide $100 across the bet line with ~$300 in chips back.  Action is now to Verbal Villain who is seated diagonally across the table.  He states “All-in” which was heard by me and my surrounding table mates.

I had what I thought clearly was the best hand.  Never being one who likes grandstanding or delaying the game when the action is over, I instantly say “call.”   There is a long pause.  Verbal Villain looks up and says “I was asking if you were all-In.”

Wha–? I look to the dealer for reinforcement that his verbal all-in declaration is binding.   The dealer states he did not hear the villain.  The player to my right (who neither of us know) quickly backs me up and says “That guy over there went all-In and this guy (me) snap called.”

The dealer tells me I’ve bet $100 and the action is back to villain.  I yell bullshit because Verbal Villain now has unfair information allowing him to basically retract an all-in bet because he knows how much I love my hand.   Instead of owning his action, Verbal Villain lectures me about this being a small stakes game and I should calm down. 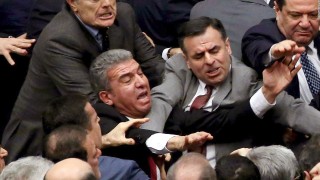 This to me reinforces he eff-ed up and I’m now further convinced the rules must apply for the integrity of the game.  Dealer sticks to his guns.  Fireworks.  A supervisor is called.

I explained to the supervisor that Verbal Villain perhaps either had an air question mark at the end of his announced All-In or was unethically angle shooting.  Either way his chips must come in the middle.   The dealer in an attempt to remain out of conflict reiterates he did not hear the villain, which is a cop-out since there is no audio recording available to help the supervisor resolve a “Karl Heard / Villain Said” dispute.

After a few minutes of deliberating, the supervisor rules that action is back to Verbal Villain.  VV folds.  I am steaming and I mean steaming.  How could this be any more cut and dry if VERBAL IS BINDING?

I eventually cooled down and became a student of the verbal is binding game.  I watched every subsequent all-in for the remainder of my Vegas trip.  This sat heavily on me for several days and a cross country flight home.

My tail is between my legs.  It is clear.  The supervisor ruled correctly.  In the interest of keeping the game as fair as possible, ruling only on what can be determined as factual and avoiding Karl Heard / Villain Said, verbal is in fact NO way binding unless it is 100% indisputable.  It is merely your announced intention to the table that is followed by 3 steps.

Step 1 is very discretionary which initially bothered me.  If your verbal announcement is different from what you want your action to be, you get to pitch your case.  Example:   I didn’t see his cards, I was ASKING if he was all in, I didn’t see all his black chips, I was joking, etc.  The dealer’s verdict in a perfect world allows slack for honest mistakes while attempting to hold slimy angle shooters accountable.  If a supervisor must be called over, your intent as explained to the supervisor is likely to get the benefit of the doubt unless that dealer clearly and firmly takes the other side.  It’s not an easy job but one that’s essential to keep the game fair.

Lesson learned.  Slow down and you’ll be much better off.  Verbal is not irrevocably binding.  If you want the villain’s all-in to stay, have some patience and wait for the dealer to visually confirm.  Now I know.

A 3 step program for helping me promote this awesome poker blog:  1. Enter your email address below to receive automatic notifications of new posts.  2. When you get those notifications, forward to numerous friends.  3. Share this post on Facebook, Twitter or Instagram.  Please and thank you!