It’s March Madness!  I was in Las Vegas last weekend with a large group of friends for the first weekend of the NCAA basketball tournament and the sports books were crazy as usual.

On Thursday, six of us reserved at table inside Lily Bar & Lounge at The Bellagio for the entire day, to eat, drink, chill and watch lots and lots of basketball.  It’s an upscale nightclub, but for March Madness they opened at 9:00 am (west coast time), just before the tipoff of the first game of the day.

Lily required a $1,000 food and beverage commitment.  We had to pay $1,000 prior to ordering anything, on a use it or lose it basis.  No rollover.  I suppose that’s fair, as we would have the table for the entire day, and could leave and return as often as we wanted.  I suppose any definition of “fair” would include the fact that we knowingly agreed to the deal.

On Wednesday night, after a poker session, one of my friends (for purposes of this blog, I’ll call him “Rick”) and I walked over to Lily to ask about the menu, specifically whether they would have typical breakfast items during the morning hours.  The hostess there explained that prior to 5:00 pm, all of their food actually comes from Snacks, a cleverly-named snack bar about 100 yards across the casino near the sports book.  Flipping her platinum blond hair as if to say she had late-night partying action to worry about and couldn’t care less about breakfast, she said they have “stuff like wings, burgers, pizza…”  The words came out all nasally, BURR-gerrrrs, PEET-suhhhh, dragging out the last syllable of each item.  We were making her brain hurt, asking breakfast questions late at night. 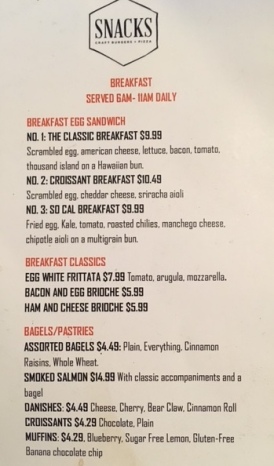 So Rick and I wandered over to Snacks.  Did I mention how clever this name is?  Snacks has electronic menu boards mounted on the wall, with a touch screen self-ordering system.  Nothing on there suggested breakfast.  We asked the manager, who said YES, we’re open 24/7 and gave us a breakfast menu that is served from 6:00 – 11:00 am.

Allow me to mention that we had rented a 3 bedroom condo just off the strip for the weekend.  Earlier on Wednesday, Rick and I had bought some cereal, milk, bagels, cream cheese and a few other items, especially so we could eat breakfast without having to get dressed and spend $20-30 per day on overpriced Vegas food.  If we have to spend $1,000 at Lily anyway and they have suitable breakfast fare, we’ll eat there on Thursday morning.  For the rest of the trip, we’ve got a plan. 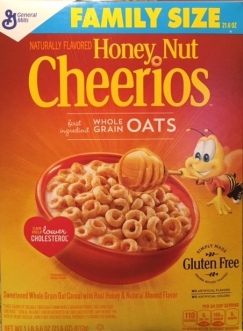 On Thursday morning, we walk the mile from our condo to the Bellagio, arriving shortly after 9:00.  As we settle into our seats at Lily, our server greets us.  She isn’t wearing any makeup and looks to be approximately nine months pregnant, a striking contrast to the other servers who are primped to the max.  She explains that we need to pay for all six in our party before we start ordering.  As I start counting out hundred dollar bills ($1,102.50 including tax and an undefined “service fee” that is not a gratuity), Rick looks over Lily’s menu.  It’s not surprising that their printed menu doesn’t include the egg sandwiches, frittatas, brioche, bagels, pastries, etc. from Snacks breakfast menu.  We are in a Las Vegas casino nightclub.

No problem.  We explain that we understand the food actually comes from Snacks; we just want to order from their breakfast menu.  Surely in preparing to take 9:00 am reservations during March Madness, when all of the food comes from a sister venue, Lily has worked it out to all of the menu items from said sister venue.  The logic of this escapes our server, who says she’ll get the manager and waddles off to find him.

Enter manager, a cocky-looking early 30’s guy wearing a suit, purple shirt and tie and gell-spiked hairdo.  He proceeds to inform us, like we’re the dumbasses in this exchange, that the only items available from Snacks are the items printed on the menu that says Lily at the top.  Because the food comes from Snacks, but they can only get certain items.  Just the ones on their menu.  His hands are tied.

I started to tilt.

The ensuring argument was ugly.  It was embarrassing.  Everybody dug in their heels.  Manager dude claims he can’t get us the breakfast items because he doesn’t have programmed buttons on his ordering system for those items.  There is no way to apply the charges against our minimum.  There is only selective integration to Snacks, as if all hell would break loose if Snacks scrambled an egg that wasn’t orderly properly through the system.  He’s never been exposed to Rule #1.

Manager dude isn’t about to send someone to Snacks to pick up a couple of muffins if he doesn’t have a muffin button to press.  He does offer one accommodation, because he wants us to be happy.  You see, Lily doesn’t allow anyone to bring in outside food or drinks.  They even searched my knapsack on the way in, and warned me not to eat that energy bar while inside.  Did I mention we were committed to spend or forfeit $1,000?  Why would I bring my own?  Manager dude tells us, in a hushed voice, that he’ll make a special exception.  If Rick or I want to walk over to Snacks and purchase our own breakfast with our own money, as long as we have them put it in a bag for us and be discreet, he’ll let us bring it inside Lily so we can watch the first basketball game while we eat.

Rick surrenders, walks over to Snacks and returns with a bagel and blueberry muffin.  It looks really good.  I swallow my hangry pride and head that way.  The breakfast menu is now displayed on the electronic wall boards, and I self-order a cinnamon roll.  After the line inches forward, the cashier tells me they are out of cinnamon rolls.  Sigh.  A bear claw pastry will have to do.

After I finish, there is still an hour or so until the Duke game starts, which is the first game of real interest.  Another of my friends, who for purposes of this blog I’ll call “Zach,” has the brilliant idea that a bunch of us who play regularly in a home poker game should all sit together at a table in the Bellagio poker room for a photo op.  He cuts off my bitching about breakfast with a typical “C’mon man!  Get a grip!”  What could possibly go wrong?

Zach negotiates with the poker desk and soon we’re all sitting in a row opposite the dealer at a new table.  On the very first hand, I lose 25% of my stack to an older guy with AA vs. my top pair on the flop.  A few hands later, I lose another chunk to one of my home game friends, who calls my flop raise with a straight draw that comes in on the turn card.  For purposes of this blog, I’ll call him “Tony.”  In prior Vegas trips, I’ve found it best not to sit at the same table with Tony.  While I’m happy to duke it out with him at the weekly home game, he seems to get in my way too much when we’re at the same table in a casino poker room.

Soon Zach is telling the dealer about my breakfast tilt.  What are friends for, anyway?  The dealer starts piling on, Tony raises pre-flop, and I look down at QQ.  Ahah!  A perfect spot to lean into it, so I tell the dealer “yes, dammit, I AM on tilt, because they SHOULD serve the breakfast menu and I’m NOT overreacting, thank you very much Zach for being so supportive.”  Rather than count out chips, I grab a handful that is about 4x Tony’s raise and place it emphatically in front of my cards.  To my surprise, when it gets back to Tony, he quickly moves all-in.

This is actually an easy read.  Tony is telling me, as a friend, “I’ve got this one!”  But I’m on breakfast tilt and can almost feel my brain going into spasmic activity, racing from thought to thought like a pinball being kicked back-and-forth between two bumpers.

I call, announcing as I do that I’m going to watch the Duke game after this hand.  Tony flips over his AA, which of course I already knew he would have, flops a set, and I stumble back to Lily in a dazed, breakfast tilted stupor.

The rest of the day wasn’t much better.

On March Madness basketball bets, all on individual games, I won 3, lost 11 and pushed 1.  The service at Lily was awful.  For lunch we ordered a large pizza.  When the pizza arrived, our server didn’t bring any plates.  Most of the day she seemed to be hiding from us.  I wandered around looking for her to ask for some plates.  By the time she brought plates, we realized we had no napkins either, but she set down the plates and waddled off quickly without asking if we needed anything else.  I had to go find her again for napkins.

In mid-afternoon, I ordered a salad, along with some fries for Zach.  She brought the fries, but 90 minutes later there was still no salad.

I gave up & went to play some more poker, still tilted from the most expensive breakfast I’ve ever had.