In Aesop’s fable The Tortoise and the Hare, an over-confident turtle, tired of being ridiculed, challenges an arrogant rabbit to a race.  The rabbit sprints out to a huge lead.  He is way ahead, so he decides to take a nap.  When he awakes, the slow yet persistent turtle has reached the finish line.  The rabbit is way behind.  There are different interpretations of the moral lesson in this story: the superior abilities of the hare succumbing to idleness (a/k/a “haste makes waste”), the perseverance of the tortoise, application to a biblical observation that the “race is not to the swift,” and so on. 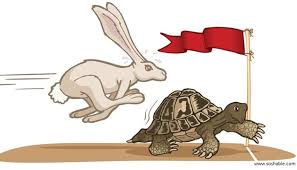 One of the interesting moments in the fable is right when the hare wakes up from his nap, not knowing if he is way ahead or way behind.  Until he finds the turtle at the finish line, he doesn’t know.  In poker, when we find ourselves in Way Ahead or Way Behind (“WA/WB”) situations, unlike the hare we should proceed with caution.  Here’s an example…

At a private game, I have a deep stack of slightly over 350 Big Blinds.  In middle position, I get QQ.  There is no action before the betting gets to me, so I raise to 5 BBs.  The player on the button, who for purposes of this blog I’ll call “Harold,” calls and there is one additional caller.

The first player checks, so I make a continuation bet of 10 BBs.  To my surprise, Harold raises to 23 BBs.  Then the 3rd player folds.  Hmmm… WA/WB.  This game offers a straight flush jackpot, so a lot of players will get involved pre-flop with almost any suited connector or 1- or 2-gappers type of hand.  And many players love to play suited aces, hoping to make a nut flush.  I’m WB if Harold has A4 or 54 or 64 suited (only two combinations each, as he cannot have suited cards with either suit of the fours that came on the flop, or 43 suited (only one combination; three of the suits ares accounted for on the flop).  I’m also way behind if he has 44 (one combo) 33 (three combos).  That’s a total of 11 WB combinations.  Since he didn’t re-raise pre-flop, I’m not worried about him having AA or KK.  Against this part of his range, my equity is 10.0%… Way Behind!

On the other hand, I’m WA if he has 55-JJ (six combinations each), 65 suited (four combinations), or just a random bluff.  That’s 46 combinations plus any pure bluffs.  I’ll include six combinations of AK off-suit as possible bluffs for math purposes.  Against that part of his range, my equity is 86.7% … Way Ahead!

Against the entire range, my QQ has 73.3% equity.  With some of the hands that crush me, like A4, Harold would have simply called my C-bet on the flop, especially with another player yet to act who he wouldn’t want to scare away.  I’m probably WA, but raising won’t get called by a worse hand (I’d be too far ahead), nor will it get a better hand to fold (I’d be too far behind).  So I call.

Turn (61 BBs): 5h.  Now there are two hearts on the board.  I check and Harold bets 15 BBs, a curiously small quarter-pot bet.  This gives me greater confidence that I’m likely ahead here, as the hands that have me WB should be betting at least half-pot.

On this 443 rainbow flop, my opening range never connects with this flop, but 30% of the time I’ll have an over pair.  The other 70% will be two high cards with no draws.  Since this flop will miss both callers’ ranges most of the time as well, I would make a continuation bet on the flop with a high frequency.  When he raised on the flop, he might think his medium pocket pairs like 66-JJ are actually good here.  He still might, as I could have called his barely min-raise with two big over cards like AK, AQ or KQ, especially if suited with a backdoor flush draw, which I’ll have over 20% of the time with this range.  Or he might think I miss this flop often enough that a bluff is well justified.

His turn bet looks a little more like a feeler bet.  He’s feeling me out to try to figure out where he stands.  If I’m rope-a-doping with a big pair, I’ll probably let him know by raising.  If I have two high hearts, the turn gave me a flush draw and he can extract value.  If I have two high cards that didn’t improve at all, a small bet might induce a fold and deny me a free opportunity to draw a winning A, K or Q.

Having assessed this as a WA/WB situation, there is no reason for me to raise.  If WA, he will fold and I won’t gain any value.  His pocket pair hands only have two outs to improve.  But I can make some more money if he bluffs again.  If WB, he’ll never ever ever ever ever fold to a raise, so aggression is suicide.  I call again.

River (91 BBs):  3h.  Now the 5h 4h and 3h are on the board, so it looks like there is a possible flush.  In reality, no flush draws are in his range.  I check again, and this time Harold bets 47 BBs, just over half-pot.  Again his bet sizing is very curious.  This looks much more confident, despite my calling again on the turn indicating a higher likelihood that I have a pocket pair instead of two over cards.  Is he now trying to represent a flush?  I don’t think so, not on a double paired board.  Is he trying harder to represent a full house with a four in his hand?  Yes, he seems to be trying harder, or maybe he actually has it.  This is the dilemma of WA/WB, further exacerbated by playing from out-of-position.  Does he want me to call or does he want me to fold?  Or does he think he wants me to call, thinking 99, TT or JJ is good, and I might call with Ace high?

After thinking this through, I remain unconvinced that he has a four in his hand, largely because most players with a four on this flop would wait at least one round before raising.  The board is scary looking, thus good for him to fire another bluff, and my passive play has underrepresented the strength of my hand.  I call.

Harold turns over Jc 3s.  Staring at the board, it takes a couple seconds to sink in.  He was bluffing, he knew he was bluffing (later explaining how he was trying to represent holding a four), and he sucked out by hitting one of his two outs on the river.  I really was WA/WB, with 95.5% equity after the turn.  This was one of those 45 times out of 1,000 that he happened to get there on the river.

And we’ve learned some things about Harold’s pre-flop calling range.