Most poker experts will describe two reasons for betting:  Value Betting and Bluffing.

Betting for value happens when you think you have the best hand, and want to get called by someone with a worse hand.  When they call, you make money.  When you make a good hand, one that is likely or certain to win at a showdown, you want to get as much money as possible in the pot and the way to accomplish that is by betting.

Bluffing happens when you think the other player has a better hand than yours, but will fold it if you make a strong enough bet.  Maybe both of you have weak hands.  Or the board fits with a narrative you can tell that represents a very strong hand.  When they fold the best hand, you make money.

In this hand from last night, however, the best line turned out to be checking for value. 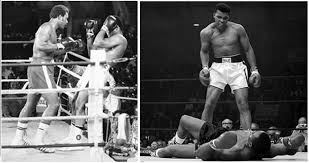 This is poker’s version of the rope-a-dope, made famous by Muhammad Ali in the 1974 heavyweight boxing title match against George Forman.  Boxing in Zaire (now Congo), Ali backed up against the ropes in a protective stance and let Foreman flail away at him.  With a defensive posture designed to deflect Foreman’s power, combined with letting his body bounce against the ropes, Ali’s body absorbed very little pain.  After five rounds, Foreman began to look worn out.  After seven rounds, Foreman was spent.  Ali won the fight with an eighth round knockout over the younger and heavily favored Foreman.

In a casino game last night, I had KJo in middle position.  Not great, not terrible.  I put in a raise to 5 BBs and got two callers.  One will act before me on future betting rounds; the other will be after me.

The flop was K43, rainbow.  This is a really good flop for me, but probably terrible for the other players.  The first guy checks.  This is what makes a hand like KJ difficult to play for value.  What hands can be in my opponents likely ranges that will call if I bet again here, and I can beat?  KT?  Kx with weaker kickers?  Pocket pairs 55-QQ?  The player who will act last is a younger, somewhat aggressive player.  For purposes of this blog, I’ll call him “George.”  This is my first trip to this casino, and he’s only been at the table for an hour or so, so I have no history and very limited information.

I also check, and George bets 8 BBs.  The first player folds.  I definitely think I have the best hand here.  If that’s true, raising will only get him to fold.  I fiddle with my chips to try to look uncertain, and call.

Turn (31 BBs):  5d.  This puts two diamonds on the board (including the king).  I check again.  George looks like he’s trying to size me up.  I would like for him to think I have a hand like QQ, JJ, TT or 99 that will have to acknowledge that he has a king in his hand for a better pair.  I would like for him to think he can bluff me.  He bets 15 BBs.  I shuffle my chips again as if I might call but I might fold.  The only hands he can have that beat me (other than something very deceptively played) are KQ, 44 or 33.  There are three combinations of 44 and 33, and eight combinations of KQ that he can have, for a total of 14 combinations out of his entire pre-flop calling range (which might have 100-200 combinations (7.5 – 15% of all possible hands).

Let’s assume his flop bet was just a simple stab at the pot leveraging his favorable position.  If he has nothing, but the first player and I both seemed to miss this flop, or are scared of the king, that’s a reasonable play.  In fact, it is one of the benefits of being last to act – you get to take down small pots like this that nobody else seems to want.  Then I called his flop bet.  That makes the pot larger and worth fighting for.  How frequently will George fire a multi-barrel bluff?  Given my image as a middle-aged white guy (MAWG), and the way I’ve played during his time at the table suggesting a fit-or-fold style, I think his bluffing frequency is high enough to warrant calling again, and so I do.

River (61 BBs):  7d.  At first this looks like a scary card.  Now there are three diamonds on the board, making a flush possible.  And there is a 345-7, so any 6 makes a straight.  I check again, knowing this looks scary enough for many aggressive players to take a final stab.  In my mind, I’m Ali and he is Foreman.  (Friends, just let me have my moment here, OK?)  I’m backed up against the ropes, with my (muscular?) forearms in a vertical position protecting my upper body and face.

George fires out a much larger bet of 43 BBs.  Let’s assume he actually has a hand that is better than mine.  Would he bet that much?  After I’ve shown (or tried to…) hesitancy in calling his flop and turn bets, and a scary looking card falls on the river, what can I possibly have that would call again.  I raised pre-flop, then turned passive on a king-high board.  Would I play this way with AA, AK, or KQ?  Or KK?  If so, would I call a bet that is nearly triple the previous bet when the river card cannot possibly have helped me?

At the table, I don’t need any time to process this.  George’s bet is begging me to go away, so I quickly flip a single chip onto the felt and announce “call.”  Ryan sheepishly turns over As Ts.  He was bluffing with total air the entire time.

Had I made the more straightforward continuation bet on the flop, George has an easy fold and I would have won a very small pot.  Rope-a-dope for value!