The Urban Dictionary is one of my favorite smartphone apps.  I frequently use it to look up unfamiliar words or phrases at poker games.  As noted in other posts, I’m a Middle-Aged White Guy (MAWG).  I don’t watch many TV shows or movies so I’m constantly behind the curve when it comes to pop culture.  Rather than suffer the embarrassment of asking questions like “What does ‘motorboating’ mean?” as another poker player did last week, I can simply look it up (although I already knew this one).  Sometimes I’ll take a quick screen shot and send it via text message to Mrs., who is even further behind the pop culture curve than I am. 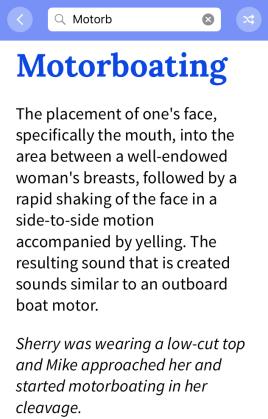 At a recent poker game, one of the players brought a small gift for another player.  These are long-time regulars at a private house game, where relationships tend to become much friendlier than in casino poker rooms.  The giver was a middle-aged white woman who, for purposes of this blog, I’ll call “Angie.”  She brought a wooden box, about the size of a milk crate, that appeared to be handmade, with the logo and motto of the United States Marine Corps emblazoned in several places, leather handles, a small tray that rests at the top inside, and a larger storage compartment underneath the tray.

The recipient of this very nice gift is a military veteran whose son is currently serving in the Marine Corps.  For purposes of this blog, I’ll call him “Fred.”  Fred was very flattered by this gift and looking forward to sharing it with his son.

The box was sitting in a side room, away from the poker table, when Angie asked Fred, quite loudly, “Don’t you think everyone would like to see my box?”

A bit of laughter and giggling erupted throughout the room, but Fred calmly replied, “Yes, I think they would” and went to get the box and bring it into the poker room.

When he returned, Fred said something to the effect of “Angie, I just want you and everyone else to know that I think your box is beautiful.”

More laughter, while Angie just beamed and looked very pleased with herself, which led to series of increasingly sarcastic sounding compliments about her box.

It quickly became apparent to me and several others that the people laughing the hardest were thinking about the Urban Dictionary definition of Box (which I learned back in high school), while Angie was only referring to the cube-shaped wooden container pictured above.

Poor Angie.  This went on for 10-15 minutes until Angie asked why everyone seemed to think her box was so funny.  “Is there some other meaning of ‘box’ that I’m not aware of?”

I told her the best way to explain this would be to lookup Box in the Urban Dictionary, which I quickly did and slid my phone across the table. 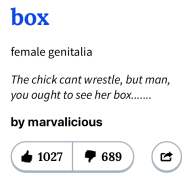 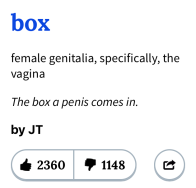 I have to give Angie credit for being an incredibly good sport once the “cat was out of the box” so to speak, if you know what I mean.  Hopefully she’ll download the Urban Dictionary app and use it wisely.

Please help me build up my blog following by sharing this post using the buttons below… Thanks in advance!