Towards the end of a frustrating poker session last night, I finally got dealt pocket aces.

Until then, double A batteries seem to have been present more than normal at this game, just not for me.

Early on there was a pre-flop all-in confrontation where the rockets flopped a set, only to be cracked when KQs hit a gutshot straight draw on the river. 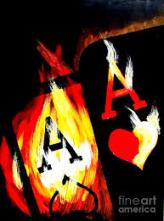 I’m pretty sure there was another early hand where snake eyes were cracked in a large all-in pot, but I cannot recall the details.

Once I had QQ and made a 3-bet after an initial raiser.  The next player then goes all-in.  For purposes of this blog, I’ll call him “Jason.”  Jason is not normally the type of player who makes a cold 4-bet all-in just for fun, and after the initial raiser folded so did I.  While Jason never showed his cards, its about 50/50 either bullets or cowboys. Later, Jason made a large 3-bet pre-flop and got multiple callers.  He bet-folded on a flop of 986 with two clubs, and after the hand stated “Alan Alda no good there.”

Another time, on the first hand after buying more chips, I called an all-in from a short stack who had open limped.  Duh… he has American Airlines and they hold up.

Another time the player on the button raises after a couple of limps, and with KQ in the big blind I make a re-raise.  When he comes over the top, I quickly surrender and he flips over the Eyes of Texas.  Less than 10 minutes later, the same guy gets Teepees again.

I’m probably omitting a couple more.  The Banditerna seemed to be everywhere, and finally, near the end of the night, I have them.

Will mine join the list of broken sticks?  Will they win the blinds and nothing else?

I raise and get three callers.  The flop is A23 with two clubs.  This is both great and dangerous, so I bet 15 BBs.  Not giving any free cards.  This time I get two callers, including Jason and the biggest stack at the table, who for purposes of this blog I’ll refer to as the “Other Dave.”  The Other Dave has had a charmed night.  The very first hand featured a 3-way all-in on the turn, with the board showing AJT-Q and two spades.  One player had shoved with a king in his hand, holding the nuts.  Jason had called with a nut flush draw.  The Other Dave then over-called with AJ for two pair.  A jack fell on the river giving him a full house and early triple up.

The turn is another 3.  Bang!  Let’s try to get maximum value.  One of these guys probably has the case ace and a decent kicker.  The other… maybe he flopped a set of threes (uh-oh!) or twos, or possibly even a straight.  Otherwise, he must have a flush draw, or some decent pocket pair and isn’t giving me any credit for hitting that flop.  I make the same 15 BB bet again on the turn.  Jason goes all-in for 42 BBs.  The Other Dave calls.

Wth only 37 BBs left on top of this action, I shove too.  The Other Dave confesses he is about to make a bad call, then does exactly that.  He shows AJ, Jason has 66 (WTF?).

Did I mention what a wonderful evening of poker this was?  A Rocky Mountain high will do that, you know…