Ralph E. Wolf and Sam Sheepdog are characters in a series of classic Looney Tunes cartoons that I enjoyed many, many years ago.

Ralph (apparently named after a Warner Bros. employee – Ralph Wolf) was modeled after the Wile E. Coyote character from the Road Runner series, with brown fur, a wiry body, huge ears, and a love for products from Acme Corporation.  Sam is a large, burly sheepdog with a mop of red hair covering his eyes, who is largely sedentary but with a knack for being at the right place at the right time.

The series is built around the idea that both Ralph and Sam are just doing their jobs. Most of the cartoons begin at the beginning of the workday, in which they both arrive at a sheep-grazing meadow, exchange pleasant chitchat, and punch into the same time clock. Work having officially begun, Ralph repeatedly tries very hard to abduct the helpless sheep and invariably fails, either through his own ineptitude or the minimal efforts of Sam (he is frequently seen sleeping), who always brutally punishes Ralph for the attempt. In many instances there are also multiple copies of Ralph and particularly Sam. 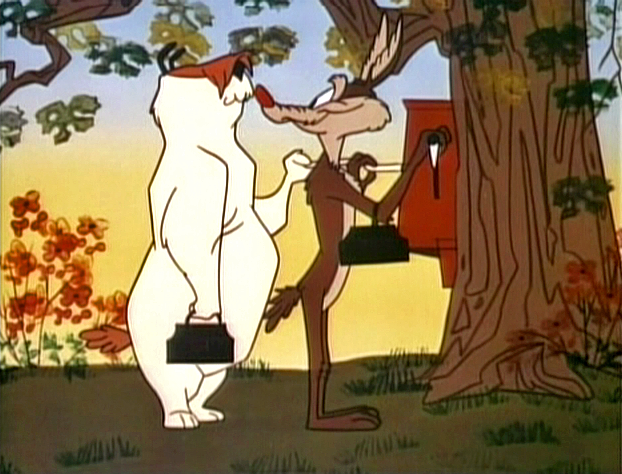 At the end-of-the-day whistle, Ralph and Sam punch out their time cards, again chat amiably, and leave, presumably only to come back the next day and do it all again. Both Ralph and Sam are performed by voice actor Mel Blanc.  In “A Sheep In The Deep” the workday is interrupted by a lunch break, which they also conduct amiably.

I’m often reminded of these wonderful cartoons when playing poker in private home games or house games.  (To me, a “home” game is one with no rake and each player takes a turn shuffling and dealing the cards; a “house” game takes a rake out of the pot, provides a dealer who works for tips and offers complimentary food & beverages.  House games are making a profit off of the game.  Home games are not.  Perhaps this should be the subject of another post, but I digress…)

Most of the players are regulars.  Many of the same players can be found at different venues.  We might invite our poker-loving friends to come join us at the games.  Over time, we get to know each other, learn about jobs, families, other interests… all the stuff that leads to friendships.  Various sub-groups go on poker road trips together.  Like Ralph and Sam, before the game starts, we exchange pleasant chitchat.

Then the poker officially begins.  While involved in a hand, each of us becomes Ralph, using whatever cunning means we have at our disposal to abduct the helpless poker chips from the “villains.”  We are aggressive and deceitful.  We bluff and exploit all weaknesses.  We seek out information that gives us an edge.  We punish villains’ mistakes mercilessly.  And each of us also becomes Sam.  When not asleep, we defend.  We lay traps.  We punish unbridled aggression in the worst possible way.

When we fold, and the player to our left or our right also folds, we can go back into chitchat mode.  “How’s work going?”  “Did you see the game this afternoon – your team won, right?”  “Let’s get together for dinner with our wives next weekend, OK?”

Then another hand is dealt.  We punch our poker time clocks and go back to battle.  It is almost as if we are clocked in whenever we have live cards in our possession, then clocked out from the time we fold until the next hand is dealt.

Or we take a break and wander into the kitchen or out on the deck.  The atmosphere is friendly there, we break bread together and share a story, celebrate each other’s joys or commiserate with each other’s pains.

I was reminded of Ralph E. Wolf and Sam Sheepdog a few nights ago when another regular player (for purposes of this blog, I’ll call him “Rob”) was getting ready to leave the game.  Rob had already racked up his chips and was getting ready to cash out.  But he punched in to the poker time clock for one more hand.  Rob (attacking, like Ralph) raised, I (defending, like Sam) called.  The flop came out… full house on the flop for me.  I laid the trap.  Rob never saw it, and it cost him over 150 Big Blinds.  That’s how the game is played…

Yet I both like and respect Rob.  Sometimes he wins and sometimes he loses, but he never seems to take the losses personally, never directs any anger at his villains.  Before he left the building, I met him at the door to acknowledge the brutality of that last hand, and to wish him a very sincere Merry Christmas.  He’ll bounce back.  He always does.

I was reminded of Ralph and Sam again last night.  For purposes of this blog, I’ll refer to the on-the-clock villain / off-the-clock friend as “Jayson.”  Earlier in the night there was a large pot, with one player all-in and Jayson and myself in a side pot.  I had pocket AAs, and put Jayson all-in on the flop.  He looked anguished and finally folded, muttering something in Japanese or Arabic that sounded like “Suqma-deek.”  He showed pocket JJs as he folded them.  Because a 3rd player was already all-in, I still had to show my cards and watched as the dealer delivered the turn card (a Jack, probably from Acme Corporation).  Lots of “oohs” and other gasps from around the table.  Then the river card – an Ace (how many times do we have to watch the cartoon to learn the sheepdog always wins?).  More reactions.  Later on, after announcing that I was leaving at a certain time, we reached what would be my last hand of the night.  Once again, it was Jayson and myself playing the roles of wolf and sheepdog.  I made a nut flush on the river.  Jayson bet and I raised all-in.  His top pair / top kicker hand was no good, and he smartly laid it down.

Tomorrow we’ll be friends again.  Except when we both have cards in front of us.

Just a bunch of guys at the office, socializing near the water cooler and time clock.  Transforming into wolf and sheepdog, then back to office buddies, over and over and over again.