There’s going to be a lot of poker math here.  If you don’t like the math, this post may not be for you.  I’ve heard it said that math is only for bad poker players.  Maybe that’s me… here goes.

In several recent posts, I’ve referred to David Sklansky’s classic book, The Theory of Poker.  One post was about Sklansky’s definition of mistakes, as imbedded in his The Fundamental Theorem of Poker:

Sklansky also was the first (or among the first) poker scholars to fully develop and explain the math side of Texas Hold’em.  Other prior posts included discussions about “Skansky Bucks,” (including one here and another one here) a theoretical calculation of the expected value (EV) of all-in bets or calls that occur prior to the river card.

Last night one of my regular blog readers was at the game.  For purposes of this post, I’ll call him “Rob” since that’s what I called him last month after he hit a 3-outer on the river to chop a large pot, after he thought he was drawing completely dead.  Rob mentioned Sklansky, except when he pronounces the author’s name it sounds more like Sklinsky.

After awhile, Rob raised to five BBs from under-the-gun (UTG), an action that conveys considerable strength.  I called with Ad 9d and there was one other caller.

Flop (16 BBs):  Jd 9c 7d.  I have middle pair with a nut flush draw.  I like it!  Rob leads out for 8 BBs.  Since I’m not going anywhere, I might as well apply some pressure, so I raise to 28 BBs.  The other player folds and Rob calls without very much hesitation.  The strongly suggests to me that he has either top set (JJJ), an overpair (AA-QQ) or AJ.  There are three combinations of JJ and AA, six combos of KK and QQ, and nine combos of AJ.  Against that range, my equity is 45.1%, although I discount the set of JJJ’s as he would be more likely to re-raise on such a wet board.

Turn (72 BBs):  8c.  This doesn’t help my hand but is an interesting card as it creates a second flush draw (which helps Rob if he has exactly Ac Jc) and also means any T now has a straight.  He checks.  I can represent a very strong hand here, which could be a flopped straight with T8, or a flopped set of 777’s or 999’s.  I have 65 BBs left and his stack is approximately equal to mine.  I shove all-in, first of all hoping he will fold if he has KK or QQ (which seems most likely) or praying to hit one of my outs if called.

If his range is exactly KK-QQ here, my equity is now 32.3%.  Against KK, any T would create a straight on the board and we would chop the pot, although with QQ that would simply give him a higher straight.  If he has the Kd or Qd, that takes away one of my flush outs.  This is virtually a break-even proposition.  If he calls, I’ll win a pot of 202 BBs 32.3% of the time, for an expected final stack of 65 BBs — the same as I would have by simply surrendering.  If he folds with any non-zero frequency, the EV of shoving is even higher. 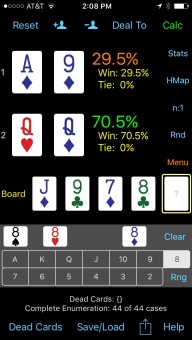 Rob tanks for quite awhile, appearing to change his mind multiple times.  He states that it seems like I flopped a set of 777’s.  I try not to give off any tells.  Inside my mind is screaming, please fold please fold please fold, as I know more than 2/3 of the time I’ll go bust if he calls.  Eventually, Rob calls.  The river is the 2d, however, giving me the nuts.  He showed QQ, including the Qd.  Against his exact hand, my equity is 29.5%, and I would need to expect him to fold 8% of the time for this to be a break-even play.

Put me down for 202 BBs after this hand, but only 60 BBs in Sklansky Bucks.

A few minutes later, Rob asks me if his call was a mistake.  In the Sklansky definition of mistake, it would be a mistake if he would not have called knowing my exact cards.  He says he definitely would call in that situation, a flush draw was what he was hoping I had (I’m not sure he considered that any A or 9 was also an out for me, but those extra outs don’t make his call a mistake; he was ahead).  We agree that he played it right, made a good call, and just got drawn out on.

“Well, f**k Sklansky!” he says, as a way of ending the discussion, and the whole table has a good laugh.

Much later I have two more all-in hands.

In the first, I raised from UTG with JJ and got two callers.  On a flop of T22 I felt pretty good and made a continuation bet. The player to my immediate left, who for purposes of this blog I’ll call “John” calls again.  He can have any Tx or most pocket pairs below T and still make this call.  I’ve played with John many times and he calls both pre- and post-flop bets with a wide range, and he has position on me.  If I’m C-betting with AK or AQ, he can take this pot away on many turn cards and may have the best hand.

Turn (43 BBs):  9.  He only has about 29 BBs remaining in his stack and I have him well covered.  I decided to go ahead and bet enough to put him all-in.  He might call with a weak pocket pair.  John does call, and flips over Qc 2c, and his trip twos wins.  Ugh!  That’s John, however, and his calling a pre-flop raise from UTG+1 seat with a hand like this doesn’t really surprise me.  At the time the chips went all-in, I had two outs and my equity was 4.55%.  I lost the pot, but I can nevertheless assign nine Sklansky Bucks to my account.

Later still, I’m on the button and post a live straddle.  John is the small blind and raise to 3x the straddle.  The next player, who for purposes of this blog I’ll call “Brooklyn Mike,” calls and everyone else folds to me.  I look down at QQ and decided to raise to 10x the straddle (which equals 25 BBs).  John shoves all-in for 65 BBs with little hesitation, then Brooklyn Mike also shoves for 75 BBs.  WTF?

I peek at my queens again, and they seem to be shriveling up right before my eyes.  Calling will cost 40 more BBs, with 165 already in the pot.  I know John can be shoving with a wider range than most players, and also know that he knows that I can be 3-betting from the button straddle with a wide enough range that I would fold part of that range to a shove.  I call. 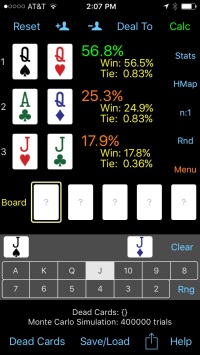 Neither John nor Brooklyn Mike turns over his cards right away, so I flip mine over first.  The body language instantly tells me that I’m ahead.  After a 9-high flop, John tables AQo.  After a low turn card, John pats the table next to me and says nice hand.  As he stands and adjusts his jacket to leave, the dealer delivers an A on the river.

Don’t hate the players (or the dealer), just hate the game.  John scoops up a huge pot, and I win a small side pot of 20 BBs.

The three hands above were my only all-ins of the evening.  In these hands, my Sklansky Bucks were (60 + 9 + 116) = 185.  My actual result was (202 + 0 + 20) = 222 (less about 5 BBs worth of rake and tips) = net of 217 BBs.  My actual results exceeded my Sklansky Bucks by about 32 BBs, and I went home with a very slightly better than break-even night.  Notice how in just three hands the actual results start to converge with the Sklansky.  If poker math and Sklansky Bucks calculations are valid concepts and accurately done, we should expect a convergence over the long run.  Short-term variance turns into long-term fairness.

Except for one thing… recency bias.  We’re all human, and our tendency is to remember the most recent hand more vividly than any others.  That’s where I lost a very large pot to John when he got lucky on the river.  That’s the memory I carried home.

With all the affection I can muster, “F**k Sklansky!”