I can’t find it now, but there was a video in the PokerSimple series by Tommy Angelo and Lee Jones on defending the blinds. Or maybe just on positional play generally. The line that stood out for me was to think about Defending the Button as far preferable to Defending the Blinds.

Many Texas Hold’em poker players get defensive when they post the small or big blind, and a player in late position raises. It looks like the villain is attacking them personally, trying to steal the blind bets. Which, of course, is exactly what is happening much of the time. And exactly what those same players will do when they are in late position and no one has opened the betting in front of them.

Rather than surrender, they want to defend. The logic (using that word loosely) is that if the villain is opening with a wide range, we should defend with a wider range than against an early position opener with a narrower and stronger range.

While there might be something to that, Tommy and Lee point out this only sets you up to play the rest of the hand out-of-position. It’s a losing battle, so why fight it?

Instead, they posit, think about defending the button with a similarly wide range… i.e., starting hands with potential to flop big. You invest the same amount (ignoring the impact of the mandatory blind bets, that is), and get to play the rest of the hand in position, making it much easier to extract maximum value from monsters while providing greater clarity about where you stand the rest of the time.

I thought about this last night, with T7 suited on the button against an UTG raise while killing time in a 6-max Zone poker session. “Yes,” I thought, “this is exactly a Defend the Button situation.”

Then BOOM! After I had raised the turn, a short stack in the small blind open jams the river and UTG calls.

A picture paints a thousand words… 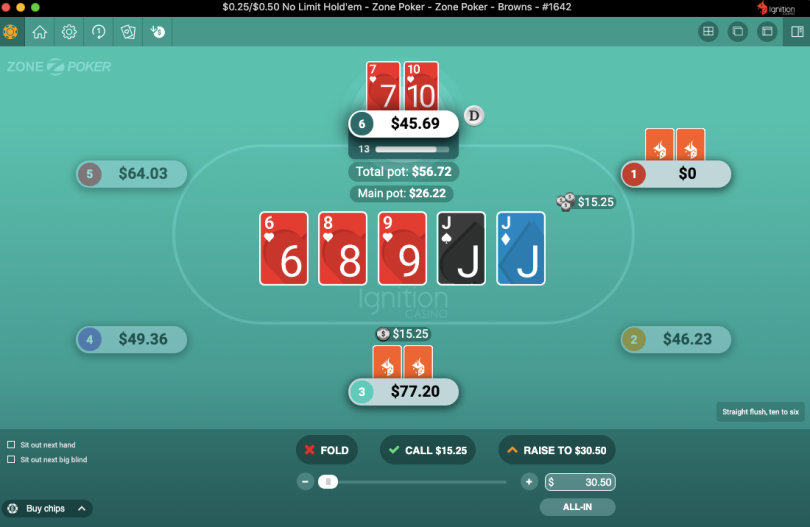